The title to this post is a rhetorical question, by the way. No, GMOs (genetically-modified organisms) are not Satan. They don’t even come close. At least the traditional Satan of Bible fame and such is pure evil. He means to be evil and to bring down creation. GMOs? Not so much.

But what, exactly, are GMOs? Are they these weird mutant plants and animals that have superpowers or something? You’d think that they were based on how some people are completely losing their minds over them. 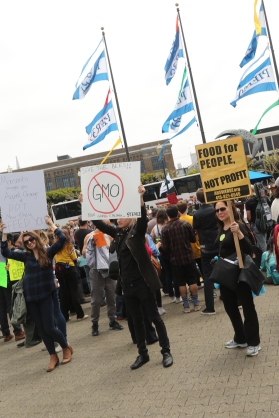 I was going to go have a chat with them, but I was on vacation.

As we were walking around yesterday, my wife and I ran into this protest. A lot of the protesters were saying things that sounded completely disjointed. Somehow, because there is a bee die-off, my grandchildren were going to be sterile. (You can see this point in one of the posters above.) There was no explanation of how this was going to happen. We were apparently expected to just accept it as gospel.

Other statements and posters were even weirder. YouTube is being used by the Illuminati to poison the minds of young, impressionable people. Because nothing poisons my mind more than “fail” videos or compilations of cats being jerks:

Anyway, back to the GMOs. The fear over GMOs is really just another example of the enormous failure in science and technology education in this country. I can understand people in places of the world where education is not readily available being scared of science and technology, but people here in the United States, where education is free up through high school? They are obviously not being taught basic genetics, or, if they are being taught basic genetics, they’re not paying attention.

The food chain “Chipotle” says it’s not selling food made from GMOs anymore. Their rationale was that some GMO plants are made to withstand pesticides, or to create their own so they can resist pests. They would rather go with more “natural” plant foods, so natural that they actually require a ton more pesticides. That’s right… YOU’RE GETTING MORE PESTICIDES IN YOUR FOOD BECAUSE YOU’RE GOING NON-GMO.

It was only because my wife pulled me away that I didn’t engage some of these people. I wanted to ask them basic science questions. What’s DNA? What’s a mutation? How is a GMO different from a “natural” organism?

A few weeks ago, a friend of mine posted a petition online to ban Monsanto and GMOs. “Unfortunately,” I told her, “ban Monsanto and other companies that do food science, and the world goes hungry.” Are these companies “too big to fail”? Yes. Do they have too much control over the food supply? Yes. Should we ban them altogether? No. Do we put into place science-based policies to make sure that food reaches all who need it at a reasonable (or even zero) cost? YES!

The thing about negotiating with your perceived enemies is that you have to negotiate with your perceived enemies. You don’t negotiate with friends. Very few of the people in the protest yesterday — or those posting petitions online — truly know their “enemy.” There are a bunch of other less ignorant ways to address concerns over how our food is being produced. I don’t mean less controversial, or less troublemaking, just less ignorant.

In all cases, approach your passions with reason. Don’t let ideology get the best of you and make you look foolish. Your cause may be important to you and to many, but, if it is absolutely misguided, you’re only going to get laughed at.

One thought on “Are GMOs really Satan?”

We might need some #coffee here in Epi and Population Health today... Three brewers and several cups going. Because #PublicHealth doesn’t sleep.
Check out my new vaccine fact generator at inmuniza.me
What do you think? Should I make her an Instagram account? #photography #parenting #likefatherlikedaughter
When you go get a paint can and a dude tries to snipe you. #callofduty #blackops4 #gaming #xbox
Blessed is the man whose wife makes him flan for his birthday. #marriedlife #mexicanfood #delicious
She is out cold under that book. #reading #parenting #fatherhood