To say that yesterday was a long day is somewhat of an understatement. It was a very, very long day.

I woke up at around 3:30am to get ready since one of the physicians from the university would be picking me up at 4:30. It was rough to get up that early, especially since I had stayed up the night before to watch the Colombia-Argentina soccer game that was all the rage around there. But I got up with a little bit of excitement because we were going to a small town about 4 hours drive from here to help investigate an outbreak of Chikungunya.

For the uninitiated, Chikungunya is a mosquito-borne infection caused by a virus of the same name. The disease is a flu-like illness that lasts anywhere from a few days to a week. Most people recover from it, but those who are too old, too young, or otherwise not in good health could die. There are also people who have complications like kidney failure or encephalitis (brain inflammation). Then, to make matters worse, joint pain and swelling could stay with you for months after you recover from the flu-like syndrome caused by the infection.

A small town in the Bolivar department (i.e. a state within Colombia) suffered from an outbreak of Chikungunya starting last year. The outbreak became known when vaccination campaign staff were alerted to a large number of people who were sick. The campaign staff contacted public health, and an investigation was done. From what I understood, several people were very sick, and many of them had joint pain that prevented them from working. It was these people that the trip was meant to help.

The drive there was interesting not only because of the variety of people that made up the team. There were physicians, nurses, epidemiologists, lab techs. It was interesting to me because of the scenery on the way there and back. And it was also interesting because the bus driver had a death wish. Okay, so he didn’t have a death wish, but he sure drove like it. He passed vehicle after vehicle, on the left or on the right, whether he legally could or not. Traffic signs were but a mere suggestion to him, and to all the other motorists on the road, it seems. Several times, he got lost and just kept going until we yelled at him. 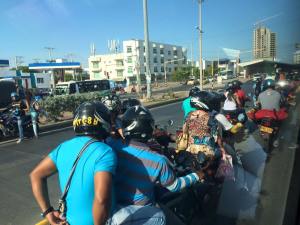 It was like something out a Latin version of Mad Max.

As we got into San Joaquin, it stuck out to me how small it was. It reminded me a lot of the little towns in Mexico that we would drive through on our way to some other destination. Those are those places where you only think about the lives of the people who live there for the time that you drive through, or about a minute. This time, however, I’d be thinking about them much more than that.

Just like when I got off the plane in Barranquilla, the heat quickly attracted my attention. One of the physicians said it was 42 degrees Celsius… Multiply times nine, divide by five… Add 32… 107.6ºF. Yeah, it felt that way. Even the local people were saying it was hot, so you know how I felt. I kept pushing fluids — of any kind — as we interviewed patients coming out of the clinic. 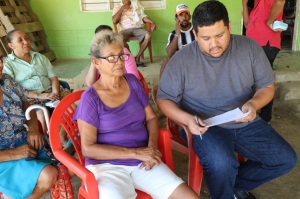 It probably didn’t help that I was wearing jeans and a dark shirt.

The interviews were about the patients’ quality of life as they recovered from the Chikungunya infections. Many of them reported painful joins (ankles, knees, hips, shoulders, elbows and wrists). A few reported not being able to work anymore because of the pain, while many reported being able to go about their day, albeit with pain. For their symptoms, the physicians prescribed and handed out prednisone. The physicians said that they had seen some good results with the prednisone, even at small doses.

As we sat there doing the interviews, a police truck pulled up and a group of six policemen stepped out. They had automatic weapons with them. They surrounded the group of us performing the interviews. I started to get a little tense, but I saw that their leader had a big smile on his face. He smiled as he talked to people and went into the health center. It appears that the group of cops were sent there to protect us. Why?

Colombia has been in a protracted civil war for over 50 years now. The police were there in case any of the rebels decided to show up and start up trouble. From what I understand, though, the rebels were not heavily active in that area. That, or they were not interested in hindering any medical aid that the locals were getting. In either case, the police unit didn’t make me feel any safer. Automatic weapons being held while drinking soda pop never do. 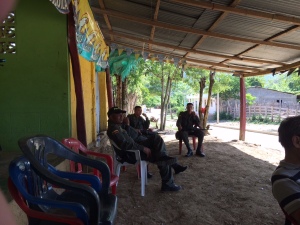 To serve and protect, and drink soda pop.

At lunchtime, we headed over to a local house where the women there were making a delicious meal of chicken, beef, rice, and shredded carrots. We sat around talking and enjoying the food, listening to different theories on how Chikungunya had arrived to that location. Someone said a woman from Venezuela had arrived to take care of a child and she herself had it. It was only a matter of time until she was stung by a mosquito and that mosquito stung someone else and so on and so forth. It was a population that had not experienced Chikungunya and it had a lot of mosquitoes around. It spread like wildfire in that locale. 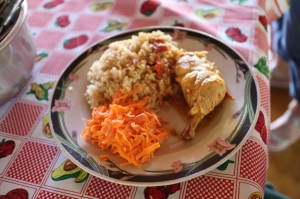 After lunch, we headed back to the health center for about one more hour. Only a few people went to see the doctors after that. We then spent a few more minutes sitting around and discussing the observations that were made. Before long, we were packed and ready to go back to Barranquilla.

I got back to the apartment around 8pm, exhausted and overheated. I didn’t care much about anything, so I quickly changed into dry clothes and went to sleep. I woke up ten hours later, still tired, still overheated… Still feeling like I needed to drink water. In fact, as I’m writing this, I’m drinking a glass of ice cold water.

Tomorrow (Monday) is a holiday here in Colombia. From what I hear, a lot of places will be closed… So I might just stick around at the apartment during the day and get some stuff done. I definitely need to have the lecture done by Wednesday so I can practice it and give it on Friday. The rest of the week will be spent at the university, prepping the lecture, and/or at the local and/or state health departments, continuing to see how they do things. My last two weeks here will be all about writing a report based on my observations and giving them recommendations on how to improve their epidemiological surveillance efforts.

That said, I think that some of the health departments back in the States have a lot to learn from what they do here with very limited resources. This is something that echoed in my head as we drove back into town yesterday. I thought of all the people who complain about the quality of the medical service they receive at urgent care centers and hospitals back home. Sure, there are some places that rival countries in the “third world” in terms of needs and facilities. But I’ve worked at some very well-staffed and brand new places where people still managed to complain because it was too hot, too cold, or the beds were too stiff. Someone even complained that the bathroom smelled “too clean,” whatever that meant. 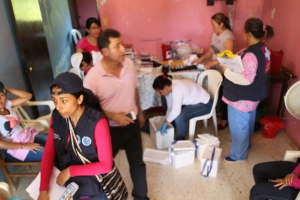 No complaints here. Only “thank you”.

It made me angry at them that these people in San Joaquin had come to the health center (where the bathroom had no running water and buckets of water sat around for use in flushing the toilet and washing your hands) and thanked the physicians and nurses who had come to their aid. They never blamed the staff for the conditions of the center, and they never asked for narcotics for their post-Chikungunya pain. Prednisone and some vitamin D would do.

I needed this trip to gain perspective… Or at least to add to the perspective that I gained growing up in Mexico. I’ve come to the conclusion that I live a privileged-if-not-blessed life. So do many people back home.