Baltimore City is one of few cities in the world where a lot of public information is put out to the public in order to be more transparent. Although I’m sure that there are still some things that are secret, they do a good job of posting homicide and other crime data. So I got a little curious and decided to pull the data on homicides for 2015 to date and see what patterns I could see, if any.

In the interest of transparency, I’m going to guide you step-by-step on what I did so you can follow along.

But, before all that, I want to make a couple of things clear. This is not intended to scare anyone away from traveling to or visiting Baltimore. It’s a fantastic city with a lot of promise. There are a lot of things to do there, and I’d say that 99% of it is safe. When we talk about murders and other crimes in Baltimore, we are talking about the signs and symptoms of a set of “diseases” afflicting the city. From institutionalized racism to poor community policing, crime is but one indicator of things that need to be fixed. So I do this more to describe the problem(s) at hand rather than to bash Baltimore.

Someone once said, “If you think Baltimore is a hemorrhoid, then quit bitching about it and be its Preparation H.” It was his way of telling us to do something about the problems that we see rather than just complain about them. I think it’s a good policy to follow.

So I went to this page on the Baltimore City Open Data page. I downloaded the data as a CSV file and opened it up in Excel. Then I went to this other page and downloaded that data as CSV. From those two files, I was able to produce a table of neighborhoods and their respective homicide rate per 100,000 residents. Some areas designated as neighborhoods have a population of zero, so I took those out. Also, eight of the homicides (as of yesterday) did not have a neighborhood assigned to them, so I left them as “none” instead of assigning them one.

What did I find?

If you don’t count the “none” neighborhood homicides, there were 182 homicides (as of the last compilation of the data). This is lower than the count of 201 according to the Baltimore Sun. So, like any dataset, there are missing data, and that’s okay. We’ll work with the data we have and assume that what is missing is missing at random.

The top ten neighborhoods by number of homicides are:

In this list, Pulaski Industrial Area has a very high rate of homicides per 100,000 residents because it only has 125 residents according to the 2010 U.S. Census. So the denominator is very tiny on which we overlay the one homicide that has happened there (to date). Sandtown-Winchester, which has had the highest total number of homicides to date, has a rate of 82.0 because it has 8,534 residents according to the census. (Seven homicides, divided by 8,534 residents, multiplied by 100,000.)

Of note, three homicides were reported in three industrial areas with populations of zero.

We also need to keep in mind that there are 183 neighborhoods with 322,831 residents that have seen no homicides so far this year. That’s more than half of the population of the city (620,175) that is living in areas with no homicides. Of course, the flip side is that almost half of the population of the city is living in neighborhoods where there have been homicides.

The one thing that troubled me is that the Sandtown-Winchester neighborhood, where there have been seven homicides so far, is one of the neighborhoods where the unrest/riots/uprisings/protests happened a few weeks ago. That is, an area that is a tinderbox and where more resources are needed is seeing a lot of people being killed there. (Three of the homicides have happened since April 27, 2015, the day of the unrest.) Penn North, with 6 homicides so far this year (5 of them since the unrest) is a neighborhood that borders Sandtown-Winchester.

For visualization purposes, here are the homicides by neighborhood in those neighborhoods that have had at least one homicide:

And here is a breakdown of the homicides by method:

It goes without saying that there is a lot that we can learn from all of these data and data from years past. An epidemiological analysis would tell us who is getting killed, where, who is doing the killing, how, and why. Then resources could be focused on the answers to those questions in order to do something about it. Unfortunately, politics get in the way and you end up with more questions than answers.

So what does it all mean?

I’m not going to deny to you that the situation in Baltimore does give me pause when visiting certain neighborhoods, especially if it’s getting late and sunlight is fading. Why? Because this is the breakdown of homicides by time of day (reported, not actual): 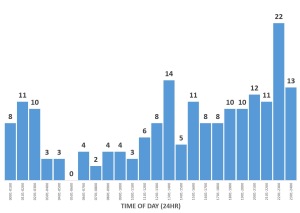 Again, if we know that most homicides are happening (and/or being reported) at certain hours, then that could change how you direct policing efforts.