With all of the odds stacked against them

One of the things that really, really, really grinds my gears is to hear people talk bad about people who use “welfare.” Words like “welfare queens” are trigger words for me. I end the conversation right then and there and walk away. (It used to be that I would engage in discussion with people who use derogatory terms like that, but I’ve come to understand that they’re beyond understanding.) I am the product of welfare assistance, and I still receive welfare to some degree.

When we first came to the United States, my mother’s legal degree from Mexico didn’t transfer over. So she had to make the daily trip back into Juarez to practice law and earn a living. However, as you can imagine, that living was not enough to sustain us here in the US. So mom applied for food stamps, and she also got an “Earned Income Credit” with her tax return. (There are some programs now where colleges and universities will give someone a ton of credit for a degree earned in Mexico. Earn your degree in Europe? No problem. Come right in.)

Those food stamps and that extra cash helped a lot. We got to eat good food, made at home by either mom or my grandmother. The extra cash came in handy, even if it came in a little late — as a lump sum — to pay for the previous months’ rent and other things. As a result of that cash shortage, mom ran up her credit, something that she is paying for still to this day. And it was the same for me. As soon as I turned 18, as a sophomore in college, I applied for and got a credit card, no questions asked. (Seriously, I just mailed in a postcard. It’s a thousand times easier now with online applications.)

I got through college through a combination of help in the form of cash from my mom and dad, cash from part-time jobs, and cash from grants and student loans. So I was lucky to have cash around to pay for rent and other needs, even if I did mismanage it a lot because money management skills were not taught to me at the time. (I learned them the hard way.) I also had a small amount of food stamps that paid for groceries, though I mostly ate at my aunt’s house or grandma would come over and make something for me. (Mom had moved to Nebraska.)

Today, I am happy to report that my credit cards are under control, my student loans will be manageable once I finish the doctorate, and my wife and I own our home. (Well, the bank owns it.) We are gainfully employed, and I even got a full-ride scholarship for the doctoral degree. We still get welfare benefits, though. The state and local taxes that we pay on the home are tax deductible, my student loans are on deferment (so the government picks up the tab for the interest), and our employers provide us with healthcare insurance (while the government subsidizes the employers, by not taxing them, for giving us insurance).

All of us benefit from the government in one way or another. There are plenty of people who would like to think that they are truly independent, and that only “welfare queens” are receiving government benefits and abusing them. But they’re not. When I point out to them how they are benefiting from tax dollars more than the amount of taxes they pay, they are quick to call me names. C’est la vie. I’m not here to entertain them.

Yesterday, I went to a talk by Dr. Kathy Edin, a professor at Hopkins who is a sociologist and social justice advocate. She wrote a book titled “$2 A Day“, about how the extreme poor in the United States (those making less than $2 per day) have to make ends meet. Her book is filled with stories of people who seem to have all of the odds stacked against them. They can’t get a job because they live in very poor counties without public transportation to take them to where the jobs are. Or they move to cities and live in squalor because the jobs don’t pay enough to live in a better place. Or they get vouchers to live in a better place, but, again, they’re far from work.

Time after time, you can see the systems and institutions that are seemingly against people who are extremely poor. (Extremely poor in the world’s biggest economy, by the way.) They get welfare benefits and use those benefits to lift themselves from poverty. Then they make “too much” money and are thrown back into extreme poverty when the welfare benefits dry up. Or they’re at the whims of politicians who pass laws to stop welfare abuse and end up hurting a ton of people in order to punish a very small percentage of abusers.

During the discussion, one of the other professors from Hopkins there mentioned something that got a big reaction from the crowd. Someone had asked about “responsible companies” who raise pay to their employees because of public pressure or because they realize that employees who can make a living are more productive, more likely to come through for the company and put in more hours and deliver a better product. The professor mentioned that Starbucks is starting to pay living wages in many parts of the country, and that they offer healthcare insurance to their employees working at least half time. “Hopkins doesn’t offer insurance unless you’re working 75% of full time.” Everyone voiced their disapproval of that.

I don’t run — or have ever run — a healthcare organization as big and complex as Johns Hopkins Hospital (and/or University). So I might be thinking too simplistically when I reason that a big, world-renowned hospital, one that receives some pretty big gifts from abroad, would be able to provide healthcare insurance to all of their employees. “If you work here, and here is a hospital, we should be able to see you without you losing an arm and a leg, figuratively,” is what I would say if I ran that place. But I’m sure that the reason they don’t offer health insurance to all of their employees is complex.

Or maybe it’s not complex and they could do it right away?

Of course, when some people hear the sad story of a mother of four who is on welfare and unemployed, they are quick to say idiotic things like, “Maybe she shouldn’t have gotten pregnant.” What they don’t know is that she maybe didn’t want to get pregnant but had no access to contraceptives. “Well, then she shouldn’t have had sex,” they say. Like that is so easy to do. Like only the women are at fault for pregnancies. Then they ignore the stories of women who were once married, with two kids, and then something happened that had the family lose their home and their savings. That financial loss leads to stress in the marriage and ends in divorce. Then, a couple of years later, some dude comes along and woos the woman into a relationship, running away scared the moment she gets pregnant. By the end of the cycle, you have a new cycle of poverty starting, multiplied by the number of children who had to grow in that cycle.

In that scenario above, it could have all been avoided if the fat and privileged had done everything possible to keep predatory home lending in check. Or if they had done everything possible to keep people from losing their homes to bankruptcy. Etcetera. Etcetera. But we’re not known for doing the things that make sense. Our Legislature has long been about reacting to crises (most of them created by their lack of foresight) rather than preventing crises by enacting legislation that is fair and well-informed.

Maybe someday they will. I won’t hold my breath. 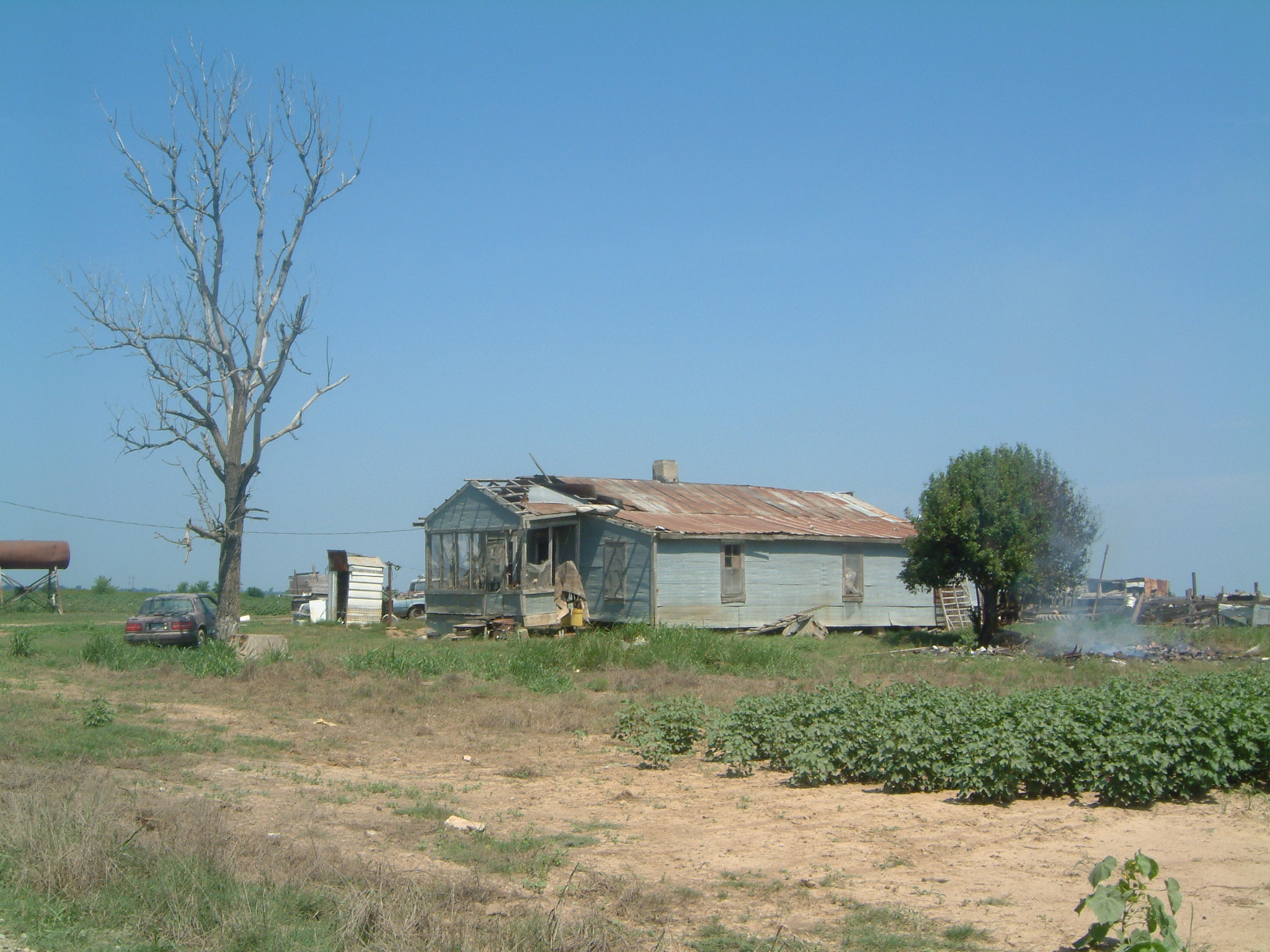 A family lives in this house in the Mississippi Delta. (Image via Jimmy Smith on Flickr, CC By -NC -ND 2.0)