I sat down over the weekend and worked out a conceptual/theoretical framework for my thesis, and it has really turned my head to mush. 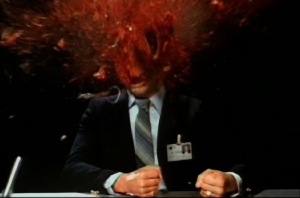 When you see most of the things that raise the risk of a person being the victim of homicide in Baltimore, you kind of get overwhelmed. From institutional racism to bad police practices at the societal level, to affiliating with gangs and committing crimes at the personal level, the opportunities for things to go bad are plenty.

Likewise, the opportunities to intervene are many. In an ideal world, I would pick up all the people at risk (mostly young African American men) and place them in meaninful positions elsewhere in the country. What do I mean? I mean that they need to be free from the social pressures that lead them to put themselves at risk.

One of the lines I drew from “police practices” to “homicide by firearm” goes through “low police involvement” which leads to a “bad neighborhood” which leads to kids with “low education” or “low socioeconomic status” and living in a place with “high criminality.” To either belong or be protected, these kids join gangs or go get a gun. Those two behaviors then put them at risk of being killed by gun violence. And that’s just leading off from “police practices.”

Of course, there are other factors, like a broken up family that fails to raise a child who can negotiate through life’s difficulties successfully. Or a broken education system that fails to give students a safe place to learn, grow, and be productive members of society, which leads them to put themselves at risk.

And on and on we go through a myriad of things that raise a person’s risk of dying through gun violence in Baltimore City.

Some more “conservative” members of the general public — like those who comment on news articles that it’s all “the fault of the blacks” — suggest that this is all a matter of personal responsibility, ignoring the fact that it’s pretty hard to learn personal responsibility when you live in a delapidated building where crime is rampant all aroudn outside. They seem to think that the “roughness” in their own lives is somehow just like what inner city Black kids go through. In essence, they’re not very self-aware.

But I don’t care about those people. I care about finding evidence for intervention in the lives of young men of color — any color — to prevent them from becoming victims. And I care about partnering with that population to make sure that I am not imposing my own views on them. (My views being those of a Mexican-American from northern Mexico and Texas, a far cry from an inner city Black kid.)

Seriously, after looking at this diagram, I’m kind of perplexed as to where to even begin.

Someone once said that the Great Wall of China was built one brick at a time and you can see it from low Earth orbit… So someone pass me the mortar.