The people who just want to be adversarial

As I was growing up, I had a cousin who was born a couple of weeks after I was. Our relationship was a good one growing up, but I noticed something about him early on. He was always being adversarial towards me, and the worst example came at the most inopportune time. We were at a military checkpoint in Mexico when a soldier asked me what I did for a living. I told the soldier that I was a medical technologist. “Nah-ah,” my cousin countered, “you’re not.” The soldier looked at me in confusion. I had to explain to him that I had just graduated from school. As we drove away, my cousin said to me that I couldn’t say I was a medical technologist until I worked as one.

That was the worst example, but there are plenty of others that are not as dangerous but hundreds of times more annoying. That’s the reason why I blocked him on social media. It didn’t matter what I posted, he would find a way to comment something in opposition to what I wrote. He’d always chalk it up to “just kidding,” but it was annoying, and I put a stop to it.

Now, my wife is the one dealing with an adversarial relative. She has a cousin who is of the more “conservative” persuasion. My wife is more “liberal.” And they’ve been butting heads over political and non-political things on Facebook for a while now. But the latest round of disagreement made me want to do a face-palm.

Sometimes two palms are not enough.

Yes, yes… I’m biased. In 99% of arguments, I’m going to side with my wife. Heck, I might even side with her that extra 1% of the time she’s not exactly correct. But hear me out…

As it turns out, the Pennsylvania legislature is looking at a bill that would require people to be “eligible” to buy a handgun. My wife posted the link to a news story about it on Facebook and her cousin was, as usual, quick to be adversarial: 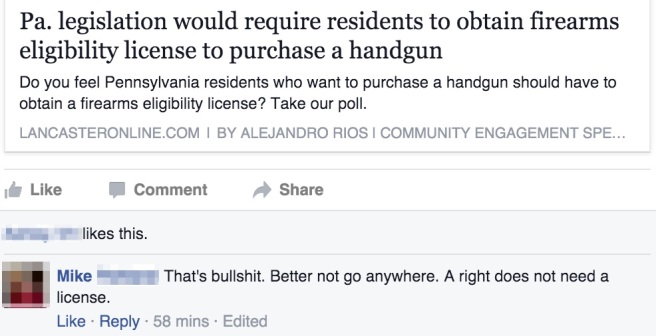 “That’s bullshit,” he wrote. “Better not go anywhere. A right does not need a license.”

Out of all the comments he’s made recently — some of which Professor Reuben Gaines has engaged him on — this one was the best (or worst, depending on how you look at it). I know her cousin. I’ve met him at family gatherings. He’s not really as dumb as some of his comments make him out to be. Like my cousin, this cousin just wants to be adversarial, in my opinion.

The truth is that all of the rights given to us by the Constitution have limits. Local, state and federal laws can and have been passed in order to limit our rights. As a constitutional expert explains:

“In only one place in the Constitution’s Bill of Rights is there a provision that flatly bars the government from regulating one of the protected rights. That is in the First Amendment, declaring that “Congress shall make no law respecting” the rights listed in that Amendment. The “right to keep and bear arms” is not one of those rights; it is contained in the Second Amendment.

Over the time since 1791, when the Bill if Rights was ratified, the Supreme Court has given its blessing to an entire governing edifice that regulates First Amendment rights: the laws of libel and defamation, limits on publishing secret military strategy, regulation of “obscene” and “indecent” expression, and limits on “hate speech.” Famously, the court has said that one has no right to shout “Fire!” in a crowded theater. Even the right to worship freely sometimes is curbed by laws that regulate conduct that has religious meaning.”

So that’s the best answer that I have for “Mike,” but I’m not going to get into it. He and my wife are adults, and I’ve seen her play mind games enough to know that she will deal with him nicely, as she has dealt with other adversaries.

As much as I love to play mind games with the most dangerous of prey — humans — there are times when you just have to recognize that someone is being adversarial because that’s all they have to provide to a conversation. It’s either their way of gaining attention that they don’t get in other ways, or their way to show you that they are smarter than you… Because the best way to say show intelligence is to say “nah-ah” and kick you in the shin.

It’s not even fair sometimes how easily one can dispatch with birdbrains.

So consider the source when someone tries to bait you into an argument, or when someone feels that uncontrollable urge to just oppose you at every opportunity. If they do it out of habit, ignore them and move on to the discussions that will enrich your life, or will help enrich the lives of others. It’s something that has taken me a lot of time to learn, but I am happier and less stressed now that I’ve learned it.

On the other hand, if you’re bored and feel like playing a mind game, go ahead and friend my wife on Facebook so you can get to meet “Mike.”