Of numbers and proportions

Last week, after the events in Dallas, Texas, where 5 police officers were shot dead, the Chief of Police in El Paso, Texas, decided to make a statement. Unfortunately, he decided to label the “Black Lives Matter” (BLM) movement as a hate group. This is unfortunate because we’re at a point in history where there needs to be a discussion between two groups: Police Departments and the people they serve. Community relations in many police departments are in trouble — to say the least — and work needs to be done to repair the bad feelings floating about.

Today, the Chief issued a statement to clarify what he meant. As usual, we all misunderstood him:

“The remarks I shared after Friday’s press conference were made during an emotional time, I hope everyone can respect that. I am a police officer first and foremost and it truly pains me any time an officer is killed. As Police Chief, the most difficult part of my job has been to notify wives, mothers, fathers and children that their loved one has been killed. I have had to bury five officers during my tenure and I will never forget their faces.

Having to endure that and hearing and seeing the negative actions that are taking place at some “Black Lives Matter” events truly disturb me. For example, in New York City, the protestors were chanting, “What do you want?” and the response was “dead cops.” At another protest in Minnesota, the protestors were chanting “pigs in a blanket fry them like bacon.” In Harlem and in Dallas “Black Lives Matter” supporters were cheering after police officers were killed. Is anyone stepping up and condemning or even attempting to stop these activities or this kind of rhetoric? NO! These actions directly and indirectly influence people looking to take part in negative activities. Our City supports the initial cause for the creation of “Black Lives Matter” but we do not support violence in any shape or form.

Our police forces need to know they have support and wanting “dead cops” is not acceptable. I grew up in the 60’s when racial tension was at its height and Martin Luther King was marching and NOT condoning violence in any manner. What is going on today is wrong! I work very hard to ensure accountability among my officers, our discipline boards include police administration as well as civilians. We do not accept negative actions on the parts of our officers and have put procedures in place to protect our community members as well as our officers.

Now is the time to mourn the loss of the police officers and the individuals that have fallen as part of the tragic shootings across America. There needs to be discussion and scrutiny of the real issues to better address this situation”

I made a comment about how people have come out and called out any BLM members on not saying inflammatory things. This is the comment I got: 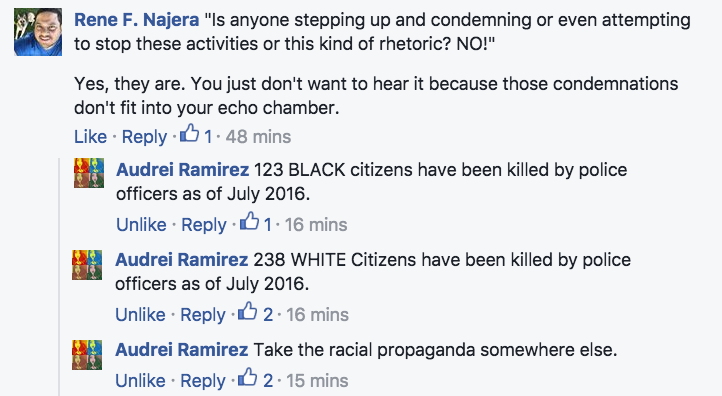 This is the kind of thing that I usually hear about vaccine-preventable outbreaks. The antivaxxers will say something like, “If vaccines are so good, then why were there so many vaccinated kids part of the outbreak?” The question that needs to be answered in these kinds of situations is not what the absolute number is. These kinds of things require proportions. 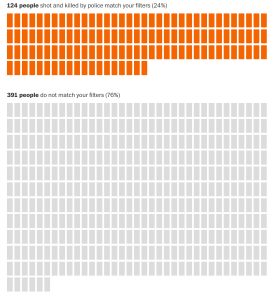 While Audrei up there was somewhat correct in her numbers, in that there were more Whites being killed than “BLACK” citizens, the proportions tell the true story. If all things were equal, then we’d see that about 13% of shootings involved Black victims. But things are not equal, are they? For some reason — or a myriad of reasons — Blacks are being shot and killed at about double the rate as other ethnic groups.

That’s for a discussion at a later time, and possibly a different setting.

One thought on “Of numbers and proportions”

We might need some #coffee here in Epi and Population Health today... Three brewers and several cups going. Because #PublicHealth doesn’t sleep.
Check out my new vaccine fact generator at inmuniza.me
What do you think? Should I make her an Instagram account? #photography #parenting #likefatherlikedaughter
When you go get a paint can and a dude tries to snipe you. #callofduty #blackops4 #gaming #xbox
Blessed is the man whose wife makes him flan for his birthday. #marriedlife #mexicanfood #delicious
She is out cold under that book. #reading #parenting #fatherhood