To Donald Trump, I’m A Criminal

I tried to be objective and read Donal Trump’s nomination acceptance speech instead of listening to him on television. You can sometimes see something on television and misinterpret it for something worse than it seems.

So I went over to Politico.com and read their transcript of the speech. All I got from it is that America is a violent, impoverished, dreadful place where immigrants are running amok killing everyone. I’ll explain.

Pretty early on in the speech, he talks about violence and how he’s “The Law And Order Candidate” who will bring crime and violence to an end.

Then he digs into immigrants:

The number of new illegal immigrant families who have crossed the border so far this year already exceeds the entire total from 2015. They are being released by the tens of thousands into our communities with no regard for the impact on public safety or resources.

One such border-crosser was released and made his way to Nebraska. There, he ended the life of an innocent young girl named Sarah Root. She was 21 years-old, and was killed the day after graduating from college with a 4.0 Grade Point Average. Her killer was then released a second time, and he is now a fugitive from the law.

I’ve met Sarah’s beautiful family. But to this Administration, their amazing daughter was just one more American life that wasn’t worth protecting. One more child to sacrifice on the altar of open borders.”

The thing is, we don’t have open borders. There’s a rather large and militarized force on the border, arresting people who cross into the US through points other than official ports of entry. Not only that, but President Obama has been deporting people at record levels. Even those on the Left who advocate for immigration reform are mad at President Obama for doing this. 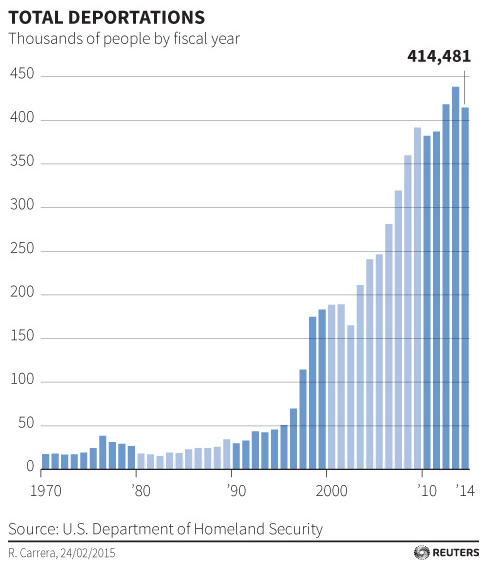 So much for open borders.

Later in the speech, he went back to that wave of immigrant killings, starting with how badly the economy has been for minorities because of immigrants:

“Decades of record immigration have produced lower wages and higher unemployment for our citizens, especially for African-American and Latino workers. We are going to have an immigration system that works, but one that works for the American people.

On Monday, we heard from three parents whose children were killed by illegal immigrants Mary Ann Mendoza, Sabine Durden, and Jamiel Shaw. They are just three brave representatives of many thousands. Of all my travels in this country, nothing has affected me more deeply than the time I have spent with the mothers and fathers who have lost their children to violence spilling across our border.

These families have no special interests to represent them. There are no demonstrators to protest on their behalf. My opponent will never meet with them, or share in their pain. Instead, my opponent wants Sanctuary Cities. But where was sanctuary for Kate Steinle? Where was Sanctuary for the children of Mary Ann, Sabine and Jamiel? Where was sanctuary for all the other Americans who have been so brutally murdered, and who have suffered so horribly?”

Of course, there were lots of other things on which Trump failed to represent the truth. But I leave that fact-checking to the professionals at NPR, The Washington Post, NBC News, and The New York Times.

There used to be a time when I affiliated with the Republican Party. I wanted people in power who were fiscally conservative, and I was afraid of radical changes because I was very much influenced by the culture on the US-Mexico border, one very much influenced itself by the Catholic Church and Mexican machismo. Then I moved to south-central Pennsylvania, and I got to see over the years how the Republican Party was taken over by xenophobes, homophobes, and religious zealots. I started to see more and more how people with last names like mine or skin tone like mine were not accepted anymore in the Republican Party.

Most of all, I became friends with people outside my socioeconomic status and outside my culture and race/ethnicity. Going to DC and Baltimore on a weekly basis when I was working at the hospital in PA, I befriended more and more Black people. I got to know LGBTQ people — including the coming out of several people who are my relatives — and see them as regular people. And I got to hear from so-called Republicans how all these people were “prone to violence,” “a scourge,” and “the downfall of our society.” None of that is true from a reasonable point of view, and especially not true if you get to know people like I’ve gotten to know people.

If you listen to or read Trump’s speech, you’d think that we were in dire straits. If you think like he and his sycophants do, you’d believe it even more. Even to the extent to voting for him. But I don’t. Call me crazy, but I see the good in people, and I read the evidence before making a decision. More than anything, I don’t fall for the ecological fallacy (or its reverse).

We’ll see next week what Hillary Clinton has to offer, but I’m not holding my breath for her, either. Until then, the nominee has been chosen.

One thought on “To Donald Trump, I’m A Criminal”

Me? I’m lecturing. What are you doing on a Thursday night?
Had a great time this morning at @elzol1079 with @patriciadelima and @chepeelcaballito talking #coronavirus. Pasé un buen rato platicando con Patricia y Chepe en El Zol 107.9 FM en Washington hablando sobre el coronavirus.
Time is fleeting...
We learned a lot of things and reached for new heights today. #parenting #daughter #fatherhood #science #technology #philadelphia
I wish I could go back and tell you so much, tell you to chill. I wish you knew then what I know now, the mistakes that you’ll make and that the problems will work themselves out somehow. I wish I could tell you that he was right in saying that tomorrow takes care of itself and you should just preoccupy yourself with today. Oh, little Ren, there’s so much to say. But here we are now, so far away.
My work office keeps looking better and better. Thanks, @mixtiles!!!