Lots of Fads Out There

My wife and I went to a cupcake store and were a little surprised when we saw a sign for “Keto Cups.” The “keto” or “ketogenic” diet is the latest diet fad that’s actually been around since the days of the Atkins Diet. The idea is to deprive the body […]

When You Need A Win

I’ve been in a funk lately. I’ve been grumpy and short-fused with people I care a lot about. I’ve been even worse to people I don’t care for. The reason for this is simple, and it’s something that I’ve seen coming every year right around this time. I’m not going […]

The last time I rode a bike was ten years ago when my brother and I participated in an adventure race. (Yeah, I rode it a couple of times after that, but it was during the race that I rode it the most. I didn’t ride again after that summer.) So […]

In one of the episodes of the television series “The Flash,” the titular character gets a bomb strapped to his wrist and told to run. In a spoof of the movie “Speed,” he is told that he must run very fast or the bomb goes off. As he is running […]

You’ve gotta keep moving, ’cause there’s no other way but forward

“Even when the rain falls down / Even when the light seems like it’s fading / Even when your heart aches, feels like it’s gonna break / That’s when you sing out loud” — “Shine Like Lightning” by Drew Holcomb I had a bad day today, so I went for […]

My brother in-law is a fitness junkie. If there is some way out there to get healthy and stay healthy, he knows it. So I was surprised when he asked several of us for any recommendations on books about handling stress. It’s not that he doesn’t know about it. He […]

Talking Tuesday: Why I run

A lot of people ask me why I put myself through the pain and agony of running five miles, ten miles, or a half/full marathon. To them, it seems like I’m losing the battle against my weight, so why bother? Why not just try some pill or something to lose the weight? Well, running is not all about losing the weight. It has other benefits as well, as I explain to you in this very short Talking Tuesday podcast.

A quick run with my wife 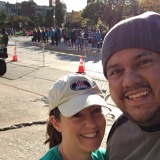 The love of my life and I went out for a run. I’m hoping it’s the first of many.

I bought a Nike FuelBand SE this last week. I had been interested in a fitness tracker for a while and, after losing my FitBit One a couple of months ago, I decided to buy something that I could wear around my wrist. The FitBit One was too small for […]

I’m on the move again

Someone once told me that starting a workout program was no big deal. They had done it a thousand times. I agree, it’s not hard to start something like an exercise program. It’s hard to stay on it. Since Monday, I’ve gone to the gym at school twice. I have […]