The Safe Places We’ll Give You

When I was a child, there was only one place where I fell asleep at night without any problem. Even at my own home, I had a hard time falling asleep. There were a lot of noises coming in from the outside, or some sort of family drama would seep […]

Lincoln Marathon and Half Marathon. Done. 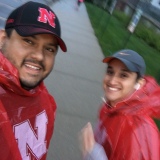 This last weekend, I had the pleasure of meeting my brother in Lincoln, Nebraska, as we finished a months-long plan to run the Lincoln Marathon. (I would run the half. He would run the full marathon.) Mom and my little sister came along to cheer us on, so I got […]

The people who just want to be adversarial

As I was growing up, I had a cousin who was born a couple of weeks after I was. Our relationship was a good one growing up, but I noticed something about him early on. He was always being adversarial towards me, and the worst example came at the most […]

Reading about a woman suing her 8-year-old nephew made me think of the inter-familial fights that I’ve witnessed. Some of those fights were brutal. You would think that those fighting each other were not related by blood. And it made me sad for the future if my wife and I have a child.

It’s a business, not a family

The first paying job I ever had was as a paperboy. My cousins and I delivered papers in the neighborhood in El Paso where we lived. It was somewhat enjoyable because it din’t require much brain power. The newspapers would be waiting for me when I got to my aunt’s house […]

From there to here and from then to now

The following picture is of my paternal great-grandfather and his three brothers. He’s the second one from the left:   That picture was taken in 1905. The brothers are working on tanning hides to sell them as leather. When I was a little kid, my grandfather took me to the […]

What makes a father or a dad?

The definition of a father is different than a dad, but both have a heavy influence on who we are and why. My dad was not always around, but plenty of people were willing and able to be fatherly and push me ahead…

What makes a mother or a mom?

Make your plans early and often

I was just reminded of something while watching “In My Own Country,” a made-for-TV movie about the HIV/AIDS epidemic through the eyes of a small-town physician. In one scene, a patient of Dr. Verghese is brought to the hospital with acute respiratory distress resulting from a pneumonia. The pneumonia itself […]