What Are We Selling in Public Health? 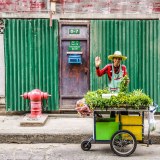 There isn’t a week that goes by where someone doesn’t call me a “Pharma Shill.” They claim that I must be getting paid by “Big Pharma” because I dare say that vaccines say lives and counter the claims of antivaxxers on social media. (“Claims” is a gentler way of saying “outright […]

Is this REALLY the hill you want to die on?

When I was in high school, there was this tough ex-military type who taught us world history. He was a really cool teacher because he seemed very interested in the subject matter. When the intervention in Somalia started, he and I had a very good discussion on why Somalia was […]

Imagine for a minute that you are a resident of Puerto Rico. If you were born there, then you are a citizen of the United States. However, your vote for President doesn’t count since Puerto Rico doesn’t have any votes in the Electoral College. Congress makes laws that affect you […]

Australia is not welcoming of anti-vaccine speakers: The implications for Freedom of Speech

As the world is shocked over the attacks against “Charlie Hebdo,” a satirical magazine in Paris, we got some news from Australia that some venues there will not welcome anti-vaccine speakers. Both situations have an effect on Freedom of Speech, and both situations can have tragic consequences. I’m not trying […]

When governments are not enough

We were talking the other day about the public health needs of Baltimore City in particular and the world in general. If you look at what is going on with regards to the health of the world, there is a lot to be done. Sure, we’ve already done a lot […]

The government shutdown is our own fault

[slab_h5][slabtext]”For lack of guidance a nation falls,[/slabtext][slabtext]but victory is won through many advisers.” [/slabtext][slabtext]- Proverbs 11:14[/slabtext][/slab_h5] During the 2012 general election, about 93 million Americans who were eligible to vote stayed home and didn’t bother voting. Think about that for a second. Almost half of eligible voters (American citizens over […]