The Epidemic of Violence in Baltimore Continues

The epidemic of homicides in Baltimore continues. Violence is infectious, and Baltimore’s former “Public Enemy No. 1” is one of the latest victims.

The sad story of Mr. Greene

Back in 2016, Robert Ponsi was bicycling through a neighborhood in Baltimore when he was suddenly attacked by a group of teenagers. From WBAL: “Robert Ponsi was found with multiple stab wounds at Venable Avenue and Old York Road around 9:10 p.m., police said. He was pronounced dead at 3:51 […]

One of the tools that we use in the investigation of outbreaks is the epidemic curve, or, as we say in the biz, the “epi curve.” An epidemic curve is a simple graphical representation of the number of cases per a unit of time over a span of time. For example, […]

Is Prison a Protective Factor for Homicide Victimization? 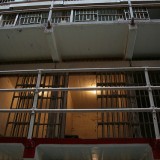 As I’ve been working on my doctoral dissertation, I’ve come across a few interesting homicide cases in Baltimore. They’re interested in that the victims had a chance to avoid being at the place and time when they were killed. They had that chance because of their own criminal activity. In […]

“Je suis français” and everything that comes with that

Like so many people out there, I am horrified at the events that transpired on November 13 in Paris. Only people who are completely devoid of any kind of feeling would not feel something. I was listening to the Germany-France soccer game on the radio when the bombs went off […]

The murder/homicide situation in Baltimore is an emergency 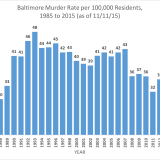 For the following graph, I took the population estimates from the US Census Bureau for the decades in question (1980, 1990, 2000 and 2010). I took the number of murders for each year from 1985 to 2012 from the Federal Bureau of Investigations’ Uniform Crime Reporting database. (One big caveat […]

Homicides in Baltimore, an analysis of sorts 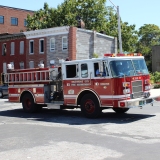 When I started working in Baltimore in 2007, plenty of people told me to be careful because of their perception of crime in Baltimore. That perception was fed by television dramas like “The Wire” or “Homicide: Life on the Street”. In those television shows, we saw somewhat of a dystopian Baltimore […]

Heroes and Villains and Everything In Between

People who don’t know any better like to put people into categories. Usually, the categories are binary, with only two options. Worse yet, the categories are on opposite ends of a spectrum. There are heroes and villains, and nothing in between. This is how I feel that the most outspoken […]